The endearing statement “to have and to hold” is no longer reserved for the wedding chapel or for the animate love of your life.

The majority of us have proclaimed our affection for something by stating that “if we could marry it, we would”.  In fact, many of us have confessed this in regards to our favourite songs.  While 2016 doesn’t bring the legal matrimony of inanimate objects, it does hold the technology to transform songs into 3D objects.

Reify, by definition, means to “make (something abstract) more concrete or real.” Reify, the Brooklyn-based group of engineers, coders, technologists, and designers do just that.  These visionaries use 3D printing  (among other tactics) to pave the future of physical media.

By using the Makerbot 3D Printer, Reify turned popular songs by Radiohead, Stevie Nicks, Neil Young, and more, into unique sculptures comprised of a variety of materials.  If that isn’t enough to pinch your potentially-dreaming self, note that these sculptures, when scanned with the Stylus app on your smart phone, come to life on your screen.  These seemingly lifeless sculptures bend and vibrate from all angles to the specific song’s audio.

Early supporters of Reify are plentiful and range from musicians such as HEALTH and YACHT, to publications such as The Wall Street Journal.  With such wide-spread praise, Reify is already proving they are much more than a one-hit wonder.

Music has long since won over our sense of sound and sight.  Thanks to the perseverance of Reify and NEW INC. (the museum-led incubator where Reify developed their concepts), we can grant our sense of touch an all-access pass to the craft we hold so close to our hearts (now, quite literally…)

[Inverted] “Ride of the Valkyries” by Richard Wagner. Image via: thecreatorsproject.vice.com

“From The Morning” by Nick Drake. Image via: thecreatorsproject.vice.com 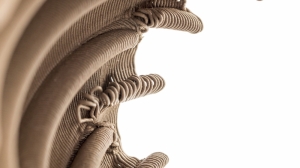 “How Music Works” by David Byrne. Image via: thecreatorsproject.vice.com